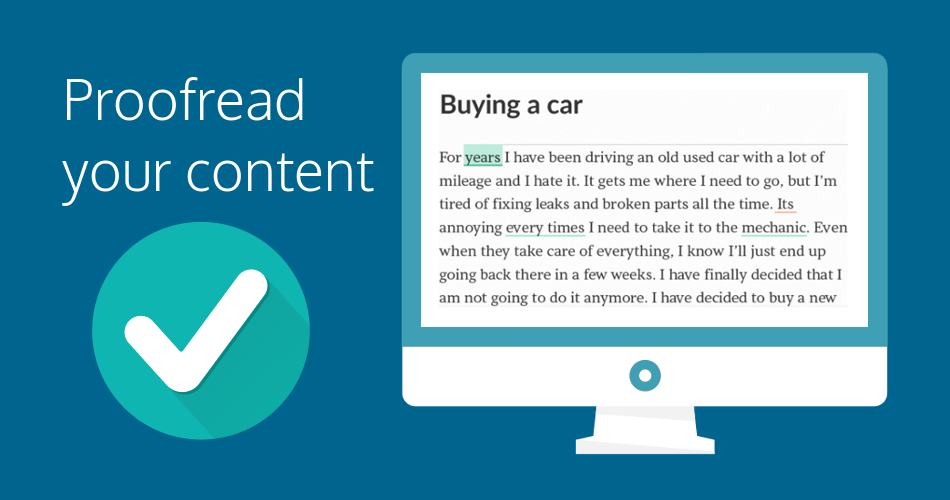 Every writer makes grammatical errors, no matter how careful they are when writing. Rewriting, editing, and proofreading are all necessary steps to polishing any written work, but often writers can’t see their mistakes. They may not understand the grammar principle behind it or they are too close to the project and their eyes skip over the error. Having a list of common grammar mistakes on hand can help writers spot and fix these errors The following are a few of the most common grammar errors writers make.

It’s easy to understand why “your” and “you’re” are often mistaken for one another. They look similar and are pronounced exactly the same way. Yet these two words have very different jobs within a sentence. The possessive “your” shows that an object or person belongs to someone.

“She watered your plant.”

On the other hand, “you’re” is a contraction not a possessive. It’s a combination of the subject you and verb are.

“You’re not a good plant parent.”

Another pair of words that sound too much alike for a writer’s comfort are than and then, and it’s often hard to decide which to use in a sentence. However, these words can be distinguished by the type of job they do. “Than” is a function word used to compare two things.

“A Rottweiler is much larger than a Chihuahua.”

Then is a transitional word used to indicate time, but is also used in if/then constructions.

“The dog waited for the girl to look away, then snatched her sandwich. If the girl’s mother catches the dog, then he’s banished to the backyard again.”

To choose between these two words, writers need to ask themselves if the sentence is a comparison. For comparisons, “than” is the right choice. Then is used in all other instances.

Often an apostrophe and the letter s are used to show possession, but not in the case of its and it’s That rule is turned upside down with its, the possessive of the pronoun it with no apostrophe.

“The tree lost its leaves”

When an apostrophe is added, this forms a contraction of it and is or has. For example, “It’s an old tree and it’s had a long life.” When deciding whether or not an apostrophe is appropriate, writers need to discern if the word is doing the job of a contraction. If it can be replaced with it is or it has then it’s is correct. If the word is acting as a possessive, then its is the right choice.

There, Their, or They’re

Another grouping of words that sound alike but do different work in a sentence are “there”, “their”, and “they’re”. The word there is used to indicate a place or the existence of something.

“The island brochure looked tempting, so she decided to go there.”

The word “their” is a possessive, showing that an object belongs to a group of people.

“She liked the travel company’s photos and their descriptions.”

The word “they’re” is a contraction of they and are.

When deciding which word to use, writers can try re placing it with the possessive our, or they and are. If the possessive works, use “their”. Otherwise, If a contraction makes sense, use “they’re”. If the word signifies a place or the existence of an object, there is the appropriate word to use.

Affect and effect often cause confusion for writers, not only because they sound similar and are spelled nearly the same, but also because their jobs are less clear than the above examples. It’s easier to tell possessives and contractions apart. The word affect is an action word used as a verb.

“The unpredictable weather will affect tourism.”

The word effect is most often used as a noun, indicating results.

“Rain has a negative effect on visitors to the beach.”

While these are some of the most common grammar mistakes writers make, they are by no means the only ones. Each writer tends to have a set of words or phrases that they habitually trip over.

To prevent grammar mistakes, writers should keep a list of the most common culprits handy when they proofread their work. This will help writers to spot errors and polish every work into a literary gem.