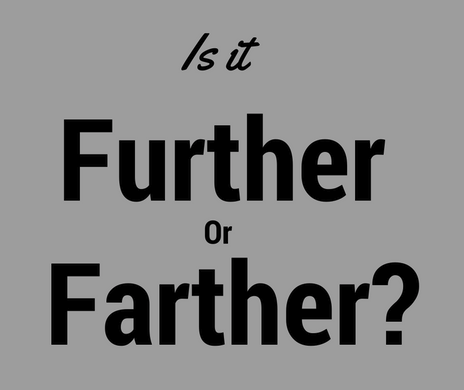 While one of the most common language mistakes that English speakers often make is confusing homonyms (words that soon the same but are spelled differently). It can be very confusing trying to discern between two very similar words that are slightly different.

So is the case with “further and “farther.” So often confused that some people think they are simply interchangeable, there is a slight difference between meanings of the two words that, when memorized, will allow you to be sure you are always choosing the right one.

While both “further” and “farther” can be used to refer to greater distances, “farther” generally indicates a physical distance while “further” is used to describe a more metaphorical distance. Since “farther” contains the word “far” in it, this isn’t too difficult of a concept to remember.

Here are some example sentences with “farther” describing an actual distance:

While “farther” has such physical limitations, “further” does not, and that distinction allows “further to be used in many more situations.

First, “further” can be used to refer to an unspecified distance or length of time.

Here are some examples with it being used in that context:

While “further” and “farther” technically have these distinctions, it is important to note that they are very objective. One might conclude this is incorrect English to switch the two, and many people really have no idea there is any difference between the two words.

The only time when there is a real distinction between the two words in which you would actually be wrong for misusing them is when you substitute the word “further” for the words “therefore” or “moreover”.

If you can’t decide which one to use, you’re safer using further because farther has some restrictions.

When used in this case as a modifier, only “further” is correct. The way to be sure you don’t use the wrong word in this situation is to substitute “further” with “furthermore”. These two words have the exact same meaning in this context, so by eliminating this version of “further” from your vocabulary and using “furthermore” instead, you can be sure you won’t say “farther” accidentally.

Here are two examples of this type of sentence. Notice that while one uses “further” and the other uses “furthermore”, they could be switched with each other and still be correct:

The small details of the English language, like the difference between “further” and “farther”, can be a frustrating task to try to master. If you can learn the most common errors people make, however, you can be sure you’ll be able to effectively communicate both in writing and in speech.